matthew mcglynn is from a certain place and does a particular kind of work and has more interests than comfortably fit into a one-sentence summary. Also, he finds writing about himself in the third person obfuscating and pretentious.

In roughly chronological order since 1989, I have been: a college graduate, a management consultant/lackey, a software QA engineer, a drummer in a hard rock band, a motorcycle commuter, a three-time layoff victim, a baker, a web developer, a health fanatic, a composer, a recording engineer, and most recently a maker of lists of uninteresting trivia.

Even more trivia, most of which is interesting and some of which is actually true: I have been fingerprinted by the INS. I am mastering the art of the komboloi. I once spent $300 to learn how to make pizza. I have walked on fire and climbed Pike's Peak. My CIA file is thicker than yours.

I live with my therapist in rural Sonoma County, about an hour north of San Francisco and about a stone’s throw from a 17-acre vineyard. I share my property with the neighborhood deer, wild turkeys, and small lizards that may or may not be geckoes, except when they get eaten by the wild turkeys in which case it ceases to matter, and somewhat recently a baby boy.

Life in the country has reinforced my tendencies to tread lightly. I rarely drive anywhere. I recycle or compost most of my garbage. I generate most of my electricity via a photovoltaic array on the roof. And I feel irrationally great about that.

At this point you might want to know what I look like. The following picture won’t help much at all. 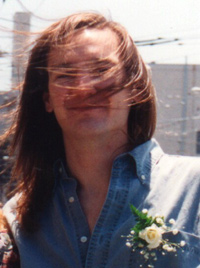 If you come back later, the picture will be different, but it probably won’t help much either.

See also this photo in the mirror project, which would help most of all except that it was taken a long time ago and I don’t look like that any more.