I’ve been meaning to write about my DrumDial for a year. I’ve been a student of various tuning practices for as long as I’ve been playing the drums (a longer time than I like to admit), so I can say with a bit of authority that this is the first tuning tool I’ve seen that actually works.

Drums can be difficult to tune because it takes a great ear to isolate the head’s basic tone from the sound of the overtones. The drum’s apparent pitch could rise or fall after impact, depending on the relative pitches of the heads and shell. Fortunately, measuring head tension takes you straight to the core problem (“the head is too tight or loose at this lug”), bypassing the misleading symptoms of the problem (“I think this sounds higher but I’m not sure!”).

With the DrumDial, it’s a simple matter to tune all the lugs to precisely the same tension. The result, in my experience, is a well-tuned drum. Without all that incessant tapping. 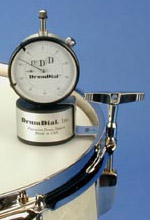 Measuring head tension makes it easy to adjust top and bottom heads relative to one another. Pitch is elusive, so it’s handy to not rely on it… just use the DrumDial to guide the tuning process. For example, set the resonant head a few PSI higher or lower to achieve the sound you want. It’s easy to make uniform changes, and easy to return to previous settings, because the calibrated meter makes everything objective. You could actually record your favorite tuning strategies, or maintain different ones for rehearsal, big vs. small venues, acoustic vs. miked gigs, etc.

Tuning is faster this way, too, because there’s no need to question “how far is far enough” at every lug. Just watch the dial. It’s no harder than pumping up a bike tire.

There are three things I don’t like about the unit:

The first two problems can’t be helped, but I can suggest a usability improvement that works around the third one: when I install a new head, I use a permanent marker to draw a ring of dots on the head, about two inches inside the rim in front of every lug. To tune the drum, I set the point of the DrumDial on each marker dot in turn. This way I never need the standoff clip.

All in all, I’ve found this to be an indispensible piece of gear, so much so that even though I’ve cracked the plastic face due to careless storage, I can’t part with the thing for the two weeks it would take to send it in for repair.