Two things I hate about the Canon SD450

I’ve owned a Canon SD450, a 5-megapixel pocket camera with a decent reputation, for about a month. There are two things about it I find nearly intolerable:

The redeye problem is horrific. More often than not, portrait subject have glowing fireballs where their eyes are supposed to be. Sure, I can darken the pupils in Photoshop — I don’t mind using a $600 piece of software to correct a design flaw in my $300 digital camera. I have nothing else better to do with my time, really.

The camera appears to have two different redeye-reduction flash modes, although I believe the redeye reduction is the same in both cases; the difference is limited to whether the flash fires at all. In Portrait mode, the camera’s flash setting defaults to “Auto Redeye Reduction.” The second redeye mode, “Redeye Reduction On,” in which the flash fires regardless of ambient light, is available at the cost of an extra button-press. Both flash modes are equally incapable of eliminating redeye.

(In attempting to determine whether the two red-eye reduction modes are doing the same thing, I looked at the EXIF data for several test images. There is no difference in notation regarding redeye, so in the absence of any visible difference in the flash’s behavior or the sample images themselves, I’ve concluded that there is no difference. The EXIF tags follow:

One workaround would be to shoot images without the flash. Given that the camera’s highest ISO setting is 400, this is not an option indoors. At ISO 400, images are grainy, and unless you like to leave a lot of lights on, blurry too. 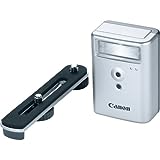 The other workaround is to buy Canon’s $100 external slave flash, the HF-DC1. I just bought one, and it does appear to alleviate the redeye problem. But it effectively doubles the size of the camera, and adds two more button presses to the process of taking the first picture. I’ll post a review of the slave flash in the future.

The second thing I hate about this camera is that I can’t access the SD card directly from my computer. I know external USB card readers are cheap ($15), but I can’t imagine Canon shaved too many cents off the manufacturing cost to not include this feature. The USB port is already there. They’re just missing some software.

And guess what? Software is really small. It would have fit inside the case.

So, until I remember to add a card reader to my next Amazon order, I’m stuck using Canon’s feature-limited “CameraWindow” software to offload images from the camera. It gives me only two options: copy all photos, or copy new photos. I can’t copy selected photos. Nor can I delete selected photos.

Also, the CameraWindow software stupidly writes image files to the computer’s hard disk with a mod time of “now,” rather than the time the image was taken. So I can take my new camera and its 1 GB memory card, shoot 500-odd pictures over a week’s vacation, return home to offload the photos, and every image file is dated within the past minute. That’s just incredibly lame.

There’s a workaround, of course; I wrote a PHP script that parses the image files’ EXIF tags, extracts the exposure date/time, and resets each file’s mod time. It’s yet-another clumsy extra step to fix a problem that my 4-year-old Coolpix 995 didn’t have.