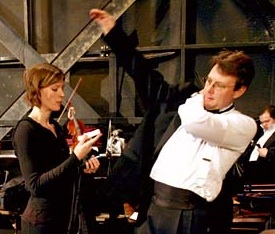 Most interesting article I’ve seen in the paper in a while:

And you thought your commute was rough.

The headline was have violins, will travel. The story describes the crazy lifestyles of the classical musicians who populate the Bay Area’s part-time orchestras. None of these orchestras employ full-time players, so the musicians have to work with more than one. Sometimes six or eight.

The pay isn’t great. The days are long. The oil changes are frequent. I’m not sure grueling would cover it.

But the players love it. I mean, they’d have to.

While Meredith Brown was putting in the 5000-10000 hours of practice she must have put in to become a professional classical musician, I was writing assembly code to draw Backgammon screens on my C=64 and solving Rubik’s Cube and so on… which leads me to the following analysis of her weekend commute.

When you commute, you pay twice, both in dollars and in hours. My 80-mile drive to the office regularly takes 120-160 minutes. If these musicians ever run into traffic, there’s a good chance they’re spending more time driving than they are playing music.

Anyway, here’s the documentary, already on DVD: Freeway Philharmonic, the classical road warriors. At $25, it will cost you less than Ms. Brown spent on gas last weekend.

PS. I used to work with Bruce Chrisp, who, with his wife Meredith Brown is featured in the SFGate article and the Freeway Philharmonic documentary. If I recall correctly, Bruce retired from a very promising career in web design to pursue music full-time. Knowing what he sacrificed, I’m awed by his dedication.

Update 2008-02-09: Bruce got in touch to announce a new website, Freeway Philharmonic, which names the local musicians and orchestras, announces news and auditions, and more.