Last year I christened my drum tracking room “Borrowed Time Studios,” an ironic comment on the fact that as soon as Raphael needed his own bedroom, or we had houseguests, I’d have to tear it down. The fact that I’ve postponed this journal entry until after having spent 12 hours carefully documenting every EQ and compressor setting, photographing every mic choice and position, stacking and wrapping acoustic foam, winding cables, latching cases, and stowing a room’s worth of studio gear in other rooms around the house makes the name all the more poignant.

So ends another summer’s recording session. I tracked six songs, which will find their way onto three CDs by two artists… not bad for a summer’s work (despite the nagging voice that says I should have done more).

Here was the view from the more fun of my two offices this summer: 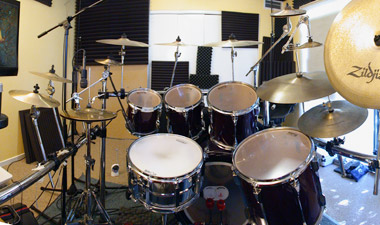 The acoustic foam was haphazardly placed, but it worked out fine. As before, the main rule was to avoid scarring the walls. I velcroed most of it to the ceiling, and duct taped more to the windows.

The big piece of soundboard on the left side of the room was a new invention for this session. It covers a small alcove and the room’s doorway. It reduced bleed into the house (aside from the concussion of kick drum that travelled straight through the walls and ceiling) and removed a troublesome source of reflections.

I opted against miking the toms for this session. None of the songs I recorded really called for heavy fills (well, one exception), and I wanted to try recording the room in stereo. The feedback I get from the various mixing engineers will inform my decision next time… or, I’ll just buy that Onyx 800R I’ve been lusting for, and do away with this silly 8-track limitation. (Why not record 13 tracks of drums? What else are you going to use all those inputs for… vocals?)

Snare mics: M422 on top, Audix D-1 underneath. Both tracks were compressed through an RNC, about 3:1, and recorded separately, to give the mix engineer lots of options for snare sounds.

Kick mics: D-112 inside, M380 outside. These two tracks were compressed through a second RNC, about 7:1, then mixed to mono.

The hi-hat mic was an ATM-31, an old condenser that sounded much better in my rough mixes than I expected. Some recording engineers figure the overheads will capture enough hat sound, but I like to put a dedicated mic on it for the offbeat chirp sounds that might otherwise get lost in the mix.

The overheads you know about.

Room mics were EV-635a’s. They lack high-end response, which works out fine for an ambient application.

The snare is a cheap old Tama steel-shell drum. I haven’t recorded it in years, but I got it sounding good for a remake of an old Police tune, the first song I tracked this summer, and then I didn’t want to take the time to dial in my “better” drum. I tuned it high and tight, Copeland style, and I think I got a pretty good crack out of it. In fact, listening to one of my rough mixes from this session, I think it sounds great, and I am certifiably lousy at mixing. So there you go.

One of the great truths of recording is that it’s impossible to finish a session without making a shopping list for next time: